“When integration is actually exclusion despite what the letter of the law says.”

Towards the end of 2009 I published the first of a planned series of articles on the tide of scumbag culture that is sweeping over the country. Detailing the attitude of many who are branded as “disadvantaged” and “minorities” but whom through my, and many others, personal experience do not constitute a minority of their own, self-imposed distinction from the rest of the populous. We are all equal in this world – it is only those who seek special treatment because of perceived circumstance or wrongful use of social guilt, who seek to twist the system and create inequality, who are in any way thinking of themselves as different.

No doubt anyone who has their ears open will be aware of social planning strategies that are operated by local authorities throughout Ireland. These strategies comprise everything from allocating individual houses in private estates, to demanding a percentage of new housing estates for “social and affordable” housing, to building one-off small developments from tax payers money to house “minorities” who need somewhere to park their Mercedes M-class jeeps.

Social planning strategies vary between counties in Ireland but because I live in Waterford I will simply, without opinion, and factually outline the reality of the social planning strategy and its resultant impact on Waterford City. The one commonality however, across all counties, is what is known as “social inclusion”. A term devised by somebody who was obviously so ridden with social guilt that they wanted to change everywhere besides their own back yard to make up for it.

Waterford City centre largely comprises long-term residents in old town houses, coupled with a few new apartment developments. There is little exception to this norm. On the outskirts of the city lie the old and the new housing estates – some of which where old style council houses in a time before private developers ruled the earth and others are council estates comprising a large proportion of “housed” families, our “disadvantaged” masses, a blend of people distinguished in society by a criminal record and/or a complete lack of respect for the world around them and the real minority who bear suffering at the hands of their “social inclusion”.

Every county has its “rough” areas, the proverbial no go zones. Limerick has Moyross, Dublin has too many to name borne of the same social planning disasters, although you’ll do well to find social inclusion in Foxrock. So, the question is really this: With so much activity and resource dedicated towards social inclusion strategies and helping to integrate minorities into various areas of each county, how come every city in Ireland has the exact same problems with a critical mass of problem people all living in the same area coupled with a few decent folk thrown in like a star on a dead Christmas tree? When does social inclusion actually turn into social exclusion?

Let us examine the situation in Waterford. Waterford City had a number of established council estates that gave residence to a large number of problem families – there’s nothing peculiar to Waterford in this respect, all cities do the same, that’s just life. These estates were on the outskirts of the city and provided decent quality accommodation for anybody “housed” there at the tax payers’ expense. Within the last 20 years however and specifically within the last 10, more and more “social inclusion” sites have been developed in the city and its outskirts. The city now has 3 purpose built “halting” sites for members of the travelling community – these comprise very high quality residences of significant size with privacy and were delivered at a huge cost to the tax payer. These sites are positioned almost equidistant from each other. In addition, two housing estates were developed by the council for the purposes of housing families and from my unfortunate personal experience they appear to house a disproportionate number of problem families and people who really do deserve the term scumbag for their respect for others, attitude towards the community and complete ungracious sense of entitlement for the benefits that they have been given free of charge.

So what? That’s every city isn’t it? Sure, it is. However, you haven’t seen the map of this development yet. You haven’t seen the complete lack of “inclusion” in this inclusion exercise. Below is a map of Waterford City, I have left the scale key to illustrate the failings of the strategy employed. The red dots are council estates with both historical, continuing, and verifiable problems caused by more than a minority of the “housed” residents. The blue dots are dedicated, purpose built halting sites, developed by Waterford City council for members of the travelling community (these members were supposedly vetted and deemed most suitable for inclusion and the award of housing). 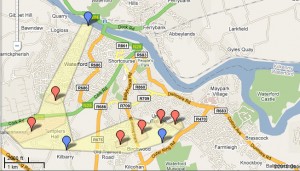 In the map above we can clearly see a ring around the outside of the city centre with a specific concentration of sites in one small geographic area, less than 2km in radius. Interestingly, one of the largest population belts in Waterford city lies outside of this yellow zone, the area known as the Newtown/Dunmore Rd stretch – not much social inclusion going on there despite the concentration of people whom could no doubt accommodate it. The vast majority of the sites shown have also been named in on-going drug programmes to help “clean up” issues. With some of the sites shown, stretching more than a kilometre in length and a practice of social inclusion in play, why is it that this picture shows a critical mass of housing sites in one specific area, separated from the larger population zones, and all of the sites shown are removed from the central population?

In the last 10 years I sadly bought a house near this critical mass, sadly not knowing the extent of the problem which seems to go completely unreported. I have since sold that house because I no longer wanted the danger of owning an asset in that area. It came as a great surprise to me that any time I wrote or contacted the council about problems in the area, they seemed oblivious to any issues at all. I’m not talking about noisy neighbours here, I’m talking about gangs of aggressive youths roaming the streets, intimidating pedestrians and motorists, obvious drug dealing in certain areas, and a myriad of other problems. After I bought my house I learned that an area with an existing critical mass of council housing and problems was to receive a further addition by way of a halting site. A halting site that had originally been planned for another location but somehow moved to be closer to existing council developments. Since that site was developed, Waterford witnessed the now nationally famous traveller feud that spilled out onto our streets, saw cars being crashed on our roads, and cost the taxpayer an unconscionable sum of money to police. My wife and I could hear gunshots only a few hundred yards from our doorstep, not from the halting site but within a nearby council estate. An area with no problems, seemingly, and no connection between the different housed locations?

I can think of no way to end this article other than to list a number of headlines that relate to serious problems in Waterford over the years. News items that have brought shame to our doorstep and huge distress for people living here. Not one of these headlines relates to something other than a problem council estate or purpose built halting site for vetted tenants. The wave of scumbag culture is sweeping over our fair land, social inclusion strategies are clearly not working because there is a significant amount of NIMBYism going on in terms of where social inclusion is placed, and the most unpalatable thing of all is that we still hear that we’re not doing enough despite providing acres upon acres of high quality, free accommodation. We still have social guilt thrown at us because we did something with our lives. Some of the best and most successful businessmen that I know, came from so-called disadvantaged areas but decided to do something with themselves rather than sit around waiting for handouts. It’s nothing to do with environment, it’s all about attitude.

1998 – Juvenile crime problems and drug use

1998 – Report on drug use in Waterford City (68% of all juvenile crime comes from a fraction of council housing locations pg. 14)

Sadly not a definitive list; even sadder to say it all relates to social inclusion sites; even sadder again that while areas have problems these ones are making national news and dragging down the reputation of what should be the jewel in the crown of the Southeast and Ireland’s oldest city. We have done everything we can, no more funding, no more handouts, no more sympathy can be allowed. People have to make their own choices in life and the responsibility should not be shared by the rest of us. Decades of trying to do otherwise has just shown us that problems get worse and even more people suffer at the hands of an ever-growing “minority”.