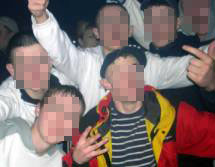 I was very fortunate to grow up in Ireland’s oldest city, Waterford, while even at times of recession and underdeveloped localities, kids had the resource of culture, a sense of pride in what was theirs, and a healthy respect for right and wrong. Now I’m not saying that kids didn’t fall off the tracks, of course they did but it was isolated incidents not a daily routine that turned into a reign of terror.

Today is a very different story. In ever-increasing numbers, young kids, young adults, and alarmingly their parents, are laying siege to our fair country. Anti-social behaviour is now a way of life, for which it is almost protected in local by-laws as a human right to invade and terrorise public spaces. Anyone who has not experienced anti-social behaviour or those who have witnessed it but never tried to tackle it, will find the next statement rather shocking: If you live in a private (whatever that means) housing estate that is being terrorised by gangs of ill-behaving teenagers (and sometimes younger) you are powerless to do anything to stop it…

The Garda response time is such that it is a physical impossibility that they arrive on time to catch the offenders in the act. If they do catch them and they are under 16 then they are simply dropped back home to Mammy and Daddy only to return an hour later, seeking revenge. If they are over 16, they are cautioned and told to move on – again the same problem ensues. If you can identify, provide video footage (since it is now legally, morally and socially questionable to take a photograph of a minor committing a crime because you are deemed to want that photo for immoral purposes), give written statements, and eventually turn up in court, then the best you can hope to achieve is the issuing of a JLO (Juvenile Liaison Officer – basically a visiting nanny) for anyone that has not previously been convicted of a crime or perhaps the ultimate goal of a slap on the wrists because by hell or high water you will not secure any other punishment! The number of ASBOs handed out since their introduction is almost countable on one hand, apart from that kids pretty much have to kill somebody before they are locked up. Oh the poor kids, the vulnerable, they must be protected! Of course if you do go to court and give evidence against (read harass a child who is crying for help if you are part of an action group) the child of a “bad” family, oh boy, you truly are on your own after that; not to mention what their bite-size accomplices will do.

We have spent so long identifying groups of people that social guilt forces us to describe as “less fortunate” or “minority” and nailing down legislation to protect them that we have forgotten to balance the legislation to protect the majority also. We now have laws that effectively ensure that any terrorising delinquent who is from a “less fortunate” or “minority” background will get away Scott free, while Paddy up the road gets 2 penalty points and a fine for doing 2kmh over the limit on a dual carriageway with no traffic. Hey, it’s the morally right thing to do, isn’t it? The law is the law and we must punish those who break the speed limit perhaps even put them off the road for repeated offences, but if you’re a member of a “minority” group or a youth from a “less fortunate” background, oh no, you can’t be banned then, the Equal Status Act and many other ridiculous pieces of biased legislation are your get out of jail free card (literally). So, just like every school kid knows the name of the Taoiseach, so too does this knowledge trickle down into the socially depraved ranks of delinquents and criminal undergrounds. Whether it’s casual vandalism or organised usage of un-prosecutable 11-year-olds to run drugs, we have laws that protect each and every one of them so that they can return tomorrow to do the same.

Attitudes change with age; we become less tolerant of our childish ways and a greater part of social conscious reflects that “boys will be boys” and the older we get, the more we forget our wayward childhood that caused anguish for our neighbours. Indeed it is possibly true in terms of our past interaction with our neighbours but what so many of these action groups and rights movements carelessly fail to recall, is that after running across our neighbour’s front garden we didn’t give their car a kick on the way out; after deciding to knock on somebody’s door and run away, the knock was not delivered through the heavy kick of a foot; anytime we were caught short on nature’s call it was when we were in the country with our parents and the nearest tree was the only option, we never unzipped and watered the neighbour’s plants like some dog marking its territory; I could go on but these meaningful differences would seemingly have no place in the debate of protecting the vulnerable.

We didn’t do these things because even though we may have been little terrors, we acknowledged that some things just weren’t done and weren’t right. Not for the age-old fear of getting a physical retribution from patre and matre but moreso because it just never entered our heads that you could urinate into somebody’s letterbox nor did it seem appealing that you could damage somebody’s car for fun – why would it? Somewhere along the line, attitude shifted, coupled with legislation and social mindset that provided enough freedom for “less fortunate” children (and indeed sometimes fortunate children who are still young enough to be immune to punishment) to roam free and test the system just short of murder. They passed on the way to the next rank below them and it propagated from there. Young adults they became and then parents themselves, taking with them the knowledge that life was just one big event without consequence – isn’t that lovely!

Where did it all go wrong? Through times of development and pseudo-boom many pockets of society developed extreme social guilt that others didn’t get up off their arses and make something of themselves – give rise to the term “less fortunate”. At the same time we somehow allowed ourselves to see criminality, trespassing, rape, public disorder, and illegal dumping as an ethnic way of life that must be protected. We then spent decades shouting this from the tallest soap boxes and instilling it in the minds of the community in addition to making those whom we patronised for their inaction and potential wastage, believe the social guilt that we spewed, that they were the “less fortunate” and “minority” groups whose way of life should never change and should be protected, why should they conform to laws that apply to everyone else? Yes, we’re “less fortunate”, our kids will roam the streets shouting and screaming so that everyone will identify them as “less fortunate” and excuse them from crime. We’ll cause social disruption, block roads, spill violence onto the streets because we are a “minority” that doesn’t have enough acknowledgement and it is our right to draw attention to ourselves so that people will understand us. The local councils will wash their hands of corrective action against “housed” problem families if they cause trouble in the community because it is their job to help the “less fortunate” and not punish them. The Gardaí will do their best to obey the letter of the law until such time that they can get a promotion from community policing and into a real position that allows them to enforce law equally, across the board. While the attitude of those who cause so many problems for society, stinks ever so badly, it is the social guilt of certain lobby groups and action groups who will never find themselves dealing with the results of their lobbying, whom have gotten us into this dire situation. They gave birth to the attitude of wrong is okay and insult thy neighbour but it’s not okay and it’s time that things changed.

No doubt there will be many who take exception to this outwardly suggestive prose, implicating the “less fortunate” as the main trouble makers and that “rich kids” are even more problematic – greetings to you who obviously have never dealt with these children outside of your social work and lobbying! Having suffered at the hands of anti-social behaviour for years now, with thousands of Euro worth of damage done to my property and living in fear most evenings to the extent that I have had to install CCTV around my home; I can tell you that 100% of my problems have been caused by “less fortunate” children from nearby housing estates. On quick survey of one estate, while working with the Gardaí to report damage done and anti-social behaviour on one occasion I noted that in a small council estate (about 40 homes) there lived a gang of over 20 children from different families, all of whom either engage in underage drinking, stone throwing at cars and houses, prior history with the Gardaí, and on, and on. There is no bad apple spoiling the barrel: The barrel is rotten, accept it. We do not need to nurture, condone, nor defend this indefensible way of life. We need to correct it and change the attitude of these social terrors so that decent people can get on with their lives. We created this attitude as a society who cared not and saw it fitting to develop unwarranted social guilt; we must now change it and correct the laws that give rise to such problems. Three strikes and you’re out – kids in detention and families evicted from housed locations for not dealing with the prior behaviour leading up to it. It’s the only way ahead, the only way to social harmony, and the only way to reduce petty crime figures.